Follow up south on the route of the great explorations, on the way of cape Horn. 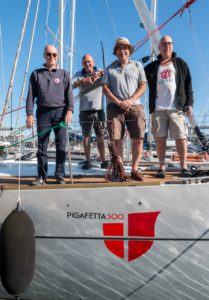 Different  are different, of course, 500 years have passed. But Antonio Pigafetta and Giovanni Galla in a little more than a month in something will look like: they will have done by sea the same route that goes from Brazil down to the Strait of Magellan, discovered precisely by the commander of the ship on which Pigafetta was embarked. It is a historical twinning, it happens just five centuries later, but the re-evocation goes deep: a way of travelling, of observing, even of being. If it means something, Pigafetta and Galla are both from Vicenza, and Vicenza has warmed up for this ancient fellow citizen who left to posterity the Report of the first trip around the world, appeared in Venice in 1524, a couple of years after his return.
Antonio Pigafetta, a patrician from Vicenza with interests as a geographer and astronomer, arrived in Spain following his fellow citizen Francesco Chiericati, apostolic nuncio, and in 1519 he managed to embark on the “Trinidad”, the flagship of Magellan’s five ships: he was a “sobresaliente” , officially a gunman but a guest. It took them a while to understand each other, with Magellano, but then the commander named him his “criado”, that is an orderly, secretary, trusted man. And Pigafetta keeps his journals, in that long journey that in the Philippines loses Magellan killed by the natives, but which continues until he returns to Seville. Overall two years, eleven months and 17 days, with mutinies, shipwrecks, and endless difficulties to complete the world tour: first, at the end reduced from 234 to 18, but with notebooks full of notes and above all a certainty since then incontrovertible: the earth is round.
Today the unknown rate is reset, but the intentions are similar. The spirit remains that of exploration: away from the tourist sites, touching the ground to see what remained after half a millennium of the “genius loci”, of the traditions not overwhelmed, of nature. Everything changed, it is true, but exploring, perhaps humanity, remains valid even today. Giovanni Galla is an architect in life, but from the boat he will be an online Pigafetta: reports in real time, images that will immediately turn around the world, without having to ask for the privilege of the Doge, as it happened to Pigafetta. And of course the boat, the one so different: a sixteen meter built in Cherbourg of the “explorer” series, nothing to do with extreme ocean racing boats, but much more solid than recreational boats.
Aluminium hull, to go even among the ice; retractable fin, for shallow waters and to be beached if needed; hyper-technology and with an internal network: you can control everything with your smart phone. “But we pull the sail up by hand” says Galla proudly, forty years of sea ( oceans) behind him, a book on the 5,000 miles in the Pacific and some very personal recipes: he is also the cook on board.
The Pigafetta-bis project is the offspring of another project: “Lifexplorer” was born for the meridians around the world, which means routes from north to south and vice versa. Cherbourg-Dublin-Inverness-Shetland-Svalbard has already travelled and returned via Lofoten-Amsterdam. Then the boat went to Cape Verde and from there to Brazil. In short, the same initial route as Magellan. As if by chance the third stage coincides with the path of the “Trinidad” and of its sisters along the coasts of Latin America until (then) to the discovery of the passage that everyone was looking for: the Strait of Magellan. Thus, following the precise notebooks of Pigafetta, history will repeat itself. The shipowner and skipper is Alberto Biffignandi, an Italian-Swiss with whom Giovanni Galla has been sailing for decades. The crew will be six people, the skipper and Galla will always be there: one leads, the other writes and cooks. On the “Lifexplorer” there are two refrigerators, a freezer, and the dinette is elevated, with a window that allows you to watch the view. They will be better than the “criado” Antonio Pigafetta but will see the same places, from Santos in Brazil the first week of December, up to Puerto Williams in Chile, with arrival on January 9th after having traveled the Magellan Strait.
The Pigafetta 500 Association, president Stefano Soprana, was immediately enthusiastic and will carry its flag down there. There should also be a mass in Puerto Deseado, which is where Magellan’s celebrated the first Mass of the New Continent. Other embassies, references, celebrations. Above all it will relive the “relationship” of Pigafetta that in his time amazed the world, and who knows how to disappear before being rediscovered in 1797, the last year of the Serenissima.
Giovanni Galla will not be able to write the same things, but we trust in the idem to feel